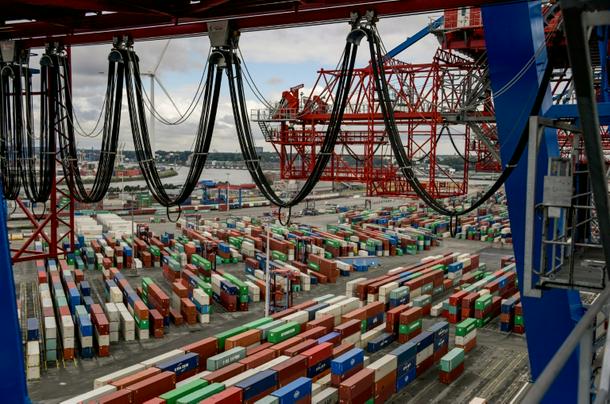 Berlin (AFP) - Germany’s government is eyeing a compromise that would allow a Chinese firm to take a smaller-than-planned stake in a Hamburg container terminal, after Chancellor Olaf Scholz rejected banning the sale outright.

Chinese shipping giant Cosco had sought a 35-percent stake and the deal would have automatically gone ahead despite opposition from several German ministries if an “emergency solution” was not found this week, a government source told AFP.

Under the proposed compromise, the government would greenlight a 24.9-percent sale, a big enough reduction to deprive China’s state-owned Cosco of any voting rights.

The fate of the Tollerort terminal at Hamburg’s port, Europe’s third busiest, has sparked fierce debate in Germany.

Badly burnt by its over-reliance on Russian energy, Germany has become increasingly wary of allowing foreign powers to gain hold of critical infrastructure.

“The emergency solution would prevent a strategic participation and reduce it to a purely financial participation,” the source said.

“Of course, this does not solve the actual concerns,” the source said, adding that the six ministries would still have preferred an outright ban.

The port controversy is the latest dispute to rattle Scholz’s three-way coalition government between his Social Democrats, the left-leaning Greens and the liberal FDP.

A standoff between the Greens and the FDP on whether to keep Germany’s nuclear plants operational for longer in Europe’s powerhouse economy only ended when Scholz stepped in earlier this month and pulled rank.

Scholz ordered all three remaining plants to stay online until mid-April to help counter a shortfall in Russian energy imports – including the Emsland plant the Greens had wanted to see decommissioned.

The FDP meanwhile had hoped to keep all three plants running until 2024.

The Greens and the FDP were united however in their opposition to Cosco’s participation in Hamburg’s port.

“This is neither good for our economy nor for our security,” Green party co-leader Omid Nouripour told German media last week.

Michael Kruse, head of the FDP in Hamburg, called the project “dangerous”.

The proposed sale has sent alarm bills ringing in Brussels too.

The European Commission warned Germany months ago against Chinese investment in Hamburg, a source close to the matter told AFP at the weekend.

The commission was worried that sensitive information about activity in the port could be relayed to China’s government, the source said.

Chinese firms already hold stakes in other European ports but the EU’s stance against Beijing has hardened since then.

Germany too has in recent years taken a closer look at Chinese investment in sensitive technologies and other areas, and reserves the right to veto acquisitions.

Scholz is due to visit China in early November, the first European Union leader to make the trip since November 2019.

Despite growing concerns at home and abroad about economic dependence on China, Scholz has repeatedly insisted that Germany should maintain strong business relations with the Asian giant.

“We do not have to decouple ourselves from some countries, we must continue doing business with individual countries – and I will say explicitly, also with China,” Scholz recently said.

China is a top trading partner for Germany, especially for its flagship automotive industry.