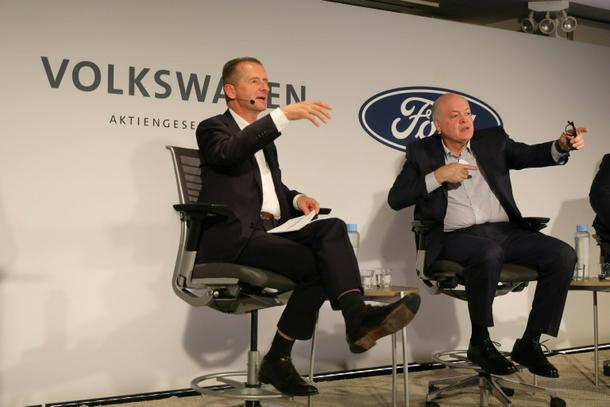 New York (AFP) - Ford announced Wednesday it is ending an autonomous driving program with Volkswagen, resulting in quarterly loss, as the auto giants retreat from a joint venture that had sought to revolutionize transport.

The Michigan auto titan recorded a $2.7 billion impairment in the third quarter on the dissolution of Argo AI program, which Ford first began supporting in 2017 and which VW later joined in 2019, in the hopes of quickly attaining full autonomy that did not require any driver engagement.

In a parallel move, Volkswagen said it was also ending its investment in Argo AI to focus on different autonomous and automated driving ventures.

The Argo AI initiative had sought to develop and commercialize Level 4-capable autonomy, which would not need a driver and would enable a rider to nap while traveling.

But with such a product more than five years away and requiring billions in investment, Ford opted to focus its investment on more attainable breakthroughs that CEO Jim Farley said could still provide drivers with more time, “the most valuable commodity in modern life.”

The impairment meant Ford reported a loss of $827 million compared with profits of $1.8 billion in the year-ago period. Revenues rose 10.4 percent to $39.4 billion.

Ford also lowered some of its full-year financial projections, citing difficulties with suppliers.

Farley said its focus would be on technological leaps in Level 2 and Level 3 autonomy.

“It’s mission-critical for Ford to develop great and differentiated L2+ and L3 applications that at the same time make transportation even safer,” Farley said.

“We’re optimistic about a future for (Level 4), but profitable, fully autonomous vehicles at scale are a long way off and we won’t necessarily have to create that technology ourselves.”

Ford said when it announced its initial $1 billion investment in Argo AI in 2017, it hoped to bring Level 4 technology to market by 2021.

While people inside the auto do not need to supervise the technology, “a human driver must be present, alert, and able to take control of the vehicle at any time, especially in the case of an emergency due to system failure,” according to JD Power.

By contrast, Level 4 autonomy “does not require any human interaction in the vehicle’s operation because it is programmed to stop itself in the event of system failure,” according to JD Power. “Since a human driver is never needed, a Level 4 vehicle may not have a steering wheel and pedals.”