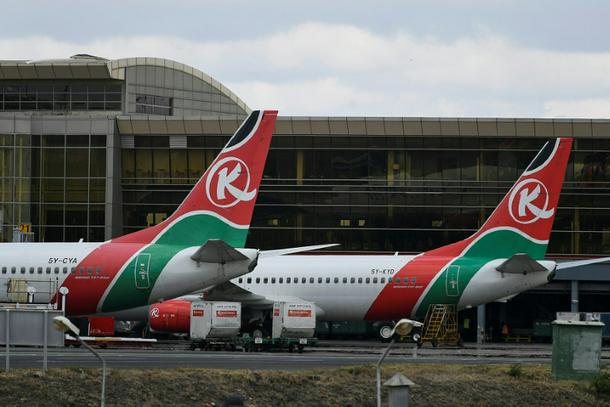 Nairobi (AFP) - A Nairobi court has ordered striking Kenya Airways pilots to return to work by Wednesday morning, a breakthrough for the beleaguered carrier after the days-long walkout forced flight cancellations and left thousands of passengers stranded.

Justice Anna Mwaure on Tuesday ordered “the Kenya Airways pilots to resume their duties as pilots by 6:00 am on 9th November 2022 unconditionally”.

The walkout has exacerbated the woes facing the troubled national carrier, which has been running losses for years, despite the government pumping in millions of dollars to keep it afloat.

There was no immediate response from KALPA to the court order, which was welcomed by the government and the airline’s management who vowed to intensify efforts to “recover the time, money and reputation lost”.

The carrier on Monday announced that it was ending its recognition of the union and withdrawing from their collective bargaining deal, accusing KALPA of “exposing the airline to irreparable damage”.

Mwaure said the court would now consider the issue and ordered the airline’s management to allow the pilots “to perform their duties without harassing them or intimidating them and especially by not taking any disciplinary action against any of them”.

Transport Minister Kipchumba Murkomen urged the pilots and the airline’s management “to obey the court order”.

“We regret that the issues at hand were allowed to persist and escalate into a strike,” he said.

“In the past three days, this strike has disrupted travel plans for over 12,000 customers… forced the cancellation of over 300 flights, and affected 3,500 other employees who were not part of it,” he added.

In a statement released Tuesday evening, the airline’s CEO Allan Kilavuka said: “We commit to complying with the Court’s directions.”

The carrier had earlier said that the strike had forced it to cancel most of its flights but Kilavuka vowed that the airline would “do everything possible to return to normalcy in the shortest time”.

Kenya Airways, which is part owned by the government as well as Air France-KLM, is one of the biggest in Africa, connecting multiple countries to Europe and Asia.

The dispute has added to the challenges facing Kenya’s recently elected government, with Murkomen on Sunday threatening the pilots with disciplinary action unless they returned to work.

Mwaure had summoned KALPA officials to appear in court on Tuesday for disobeying last week’s injunction against the strike.

The airline and the government have accused the union of engaging in “economic sabotage”, with Kenya Airways warning that the strike would lead to losses estimated at $2.5 million per day.

“Due to this unlawful action by KALPA, the customers of KQ both locally and globally have suffered and continue to suffer immeasurable inconvenience and losses,” Kenya Airways said in a statement Monday using the shorthand airline code.

The pilots in turn have accused the airline’s management of making “no concessions” to end the stalemate.

The protesting pilots, who make up 10 percent of the workforce, are pressing for the reinstatement of contributions to a provident fund and payment of all salaries stopped during the Covid-19 pandemic.

It was founded in 1977 following the demise of East African Airways, and flies more than four million passengers to 42 destinations annually.

It has been operating in large part thanks to state bailouts following years of losses.