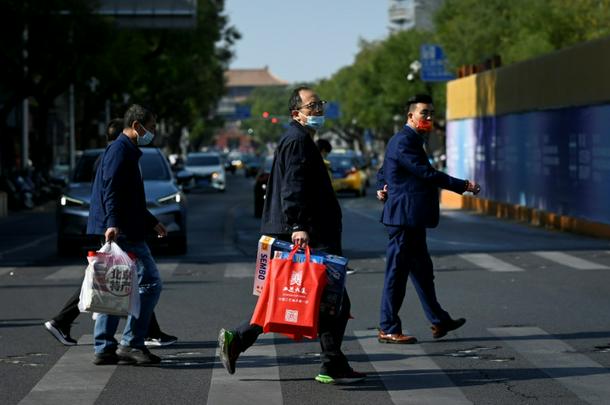 Beijing (AFP) - Chinese shoppers flocked to online commerce giants on Friday, snapping up hundreds of billions of yuan in bargains, though an economic malaise took some shine off the annual Singles Day fever.

Sales revenues across platforms operated by tech giants such as Alibaba and JD.com hit around 262 billion yuan ($36.7 billion) between 8:00 pm on Thursday and 2:00 pm (0600 GMT) on Friday, according to an estimate by research firm Syntun.

Analysts said demand was more muted than in previous years, while consumers told AFP that a lack of spending power and an economy groaning under a hardline zero-Covid policy had dampened desire to spend.

Nonetheless, the combined gross value of products sold since late October “may surpass a trillion yuan” for the first time, Xiaofeng Wang, principal analyst at research firm Forrester, said earlier in a note.

“This year, merchants and platforms are focusing less on sales and more on profit and conversion rates,” said tech analyst Liu Xingliang.

“After so many years, it’s natural for (Singles Day) to become less popular,” he said, adding that a bright spot appeared to be greater interest in livestreamed sales.

“Chinese consumers have become more rational and no longer hoard large amounts of goods like they did in years gone by”, economist Song Qinghui told AFP.

“They buy according to their needs, perhaps because consumption is becoming more transparent, and also because of the impact of the Covid-19 pandemic,” he said.

Conceived by Alibaba, the event’s title riffs on a tongue-in-cheek celebration of singlehood inspired by the four ones – “11⁄11” – that denote its date of November 11.

It has grown to encompass much of China’s retail sector, with merchants offering varying levels of discounts starting in late October.

Once a festival of frenzied consumption led by Alibaba’s effervescent founder Jack Ma, Singles Day has been more muted in recent years as Beijing cracks down on online platforms and state media coverage has waned.

Beijing resident Liu Yingxue said the Single’s Day atmosphere was “not as enthusiastic” as in previous years.

The platforms “used to have more ads and promotions… and don’t give so many discounts these days,” she told AFP.

The mood has been dampened further this year as Beijing persists with a zero-Covid strategy that has hammered business confidence and chipped away at consumer demand.

The event, conceived in 2009, has previously lured throngs of Chinese influencers alongside Western celebrities including Kim Kardashian and Taylor Swift, drawing heavy coverage in both domestic and international media.

This time around, a series of scandals and a campaign against tax evasion have lowered expectations of celebrity endorsements, with influential Chinese live-streamer Viya disappearing from social media late last year in the wake of a tax probe.

Alibaba said last week the event could “make a big difference” for retailers struggling with supply-chain disruptions and inflation this year, including a slew of foreign brands.

Businesses and consumers alike have been laid low by China’s Covid prevention policies, which see officials wield snap lockdowns, mass testing and lengthy quarantines in response to a handful of cases.

Beijing resident Li Xiaofeng said the “state of the whole economy” was likely putting platforms and merchants under more pressure, “so they are offering fewer discounts”.

Another denizen of the capital, Lin Xiangru, blamed Covid – adding that “people have less guaranteed income than before, so they don’t want to spend money on desired products.”

China is the last major economy wedded to a zero-Covid strategy, with officials insisting they will stick “unswervingly” to the policy.

But Beijing announced the relaxation of some of its harsher curbs on Friday, cutting quarantine for overseas arrivals and scrapping Covid-related flight bans.