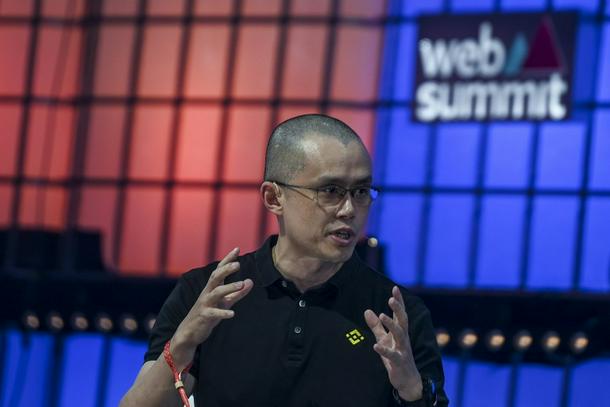 Zhao, who founded Binance in Shanghai in 2017, has emerged as the most central and most visible figure in crypto

Paris (AFP) - At parties, on stages and in meetings, Changpeng Zhao is rarely seen without his black polo shirt, emblazoned with the insignia of his crypto firm Binance.

The look is vital to the myth of Zhao, the boy from rural China who once flipped burgers for a living in Canada but now has a personal fortune of $17 billion, according to Forbes.

“I’m a small entrepreneur,” he told AFP earlier this year when comparing himself to Elon Musk, adding for good measure that he was just a “normal guy” in comparison to the world’s richest man.

Yet Binance has cornered more than half of the crypto-trading market and its main rival, FTX, was all but wiped out this week – elevating his company to the pinnacle of the crypto world.

And 45-year-old Zhao, who founded Binance in Shanghai in 2017, has emerged as the most central and most visible figure in crypto.

Hyperactive on social media, popping up at every possible tech conference and rarely out of TV studios, he expanded his reach even further recently by shovelling $500 million to Musk to buy Twitter.

Yet his breakneck rise has been dogged by controversy.

His cryptocurrency exchange has been repeatedly accused of facilitating money laundering and sanctions busting – claims it denies – and last month it was hacked for around $100 million.

The rags-to-riches tale of Zhao’s life has become almost mythical in crypto circles.

His early life in China was scarred by hardship when his parents were denounced and sent to the countryside for a dose of peasant hardship.

After the family emigrated to Canada a decade later, young Zhao had to work at McDonald’s and a petrol station to help the family survive.

This instilled “drive, grit, and initiative” into the young man and helped to create today’s “crypto leader”, according to the Binance website.

Zhao’s nomadic childhood informed his adult life, which has seen him crop up everywhere from New York to Tokyo.

The official legend has it that he caught the bitcoin bug during a conversation around a poker table, and started Binance a few years later in Shanghai.

He quickly left China and has since hinted that he might set up Binance in many jurisdictions – Singapore, France, Malta, Dubai, Bahrain – without definitively committing to any of them.

He often says he “favours good regulation over bad” and dismisses the idea of a company needing headquarters as a “complex issue”, before swiftly changing the subject.

This opacity has made him a popular figure among crypto purists, who loathe any form of regulation, and has kept regulators from knocking too hard at his door – so far.

However, like many crypto companies, there has long been a whiff of scandal around Binance.

It has been accused of pursuing growth at any cost and failing to properly check the identities of customers, allowing money laundering and sanctions busting to flourish.

Zhao has feuded openly with journalists over the claims – accusing outlets including Reuters of peddling fake news.

However, a Reuters story this month suggesting Binance had handled billions of dollars in transactions involving Iranian entities proved harder to brush off.

Binance admitted in a blog post – not written by Zhao – that it had “interacted with certain Iran-based nexuses” and had moved to freeze the accounts.

It remains to be seen what further action might come Binance’s way for the sanctions faux-pas, but Zhao’s bruising run-ins with the media have seen him increasingly champion the free speech absolutism also favoured by Musk.

Surprisingly, given their shared interests and newly entwined businesses, the two men have not met in person.

But ever mindful of his blue-collar image, he added: “If we happen to be in the same city, I wouldn’t mind it. If he’s a good drinker.”