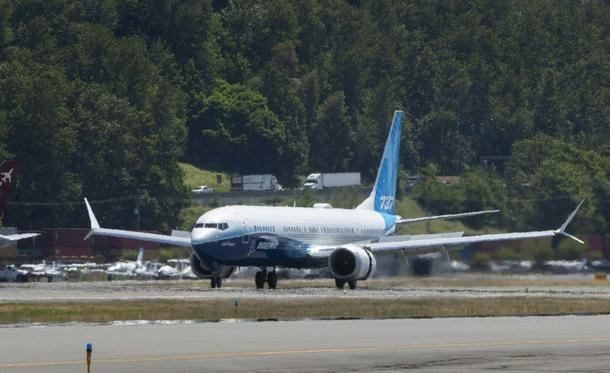 Boeing reported a surprise $3.3 billion loss due to rising costs in its defense business

The performance woes in defense – which also affected the KC-46 refueling and military transport aircraft and the T-7A Air Force pilot training system – reflect the drag from supply chain problems that have plagued the broader economy, as well as the restrictive nature of government contracts.

Investors initially took the disappointing news in stride, but shares fell sharply after a conference call in which Boeing executives predicted a very slow ramp-up of commercial plane output and expressed doubts about resuming plane deliveries to China anytime soon.

Locking Boeing into fixed-price government contracts was unwise, Chief Executive Dave Calhoun acknowledged in an interview with CNBC that touched on the company’s troubled execution of an Air Force One procurement revamp negotiated with Donald Trump.

“The biggest, probably, mistake on… Air Force One was the fixed price nature of it,” Calhoun said, adding that a “cost-incentive” type contract would have been better for such a project.

The difficulties in Boeing’s defense program came as the company saw a jump in revenues in its commercial airplane division following the resumption of deliveries of the 787 Dreamliner and an increase in deliveries in the 737 MAX.

The aviation giant reported a four-percent rise in revenues to $16 billion, which also missed analyst estimates.

On the up side, Boeing reaffirmed it is on track for positive free cash flow in 2022, a statement that temporarily boosted shares. The company also described demand for commercial planes as robust in spite of worries about the broader global economy.

But executives offered a cautious timetable on ramping up commercial jet production, noting that engine suppliers continued to struggle to lift output.

“I am confident that the industry will step up, but it will take more time than I probably had hoped,” Calhoun told financial analysts. “And I suspect it won’t be until we get to the sort of end of next year before we can really make sizable rate increases.”

The Alaska Airlines order includes 42 of Boeing’s latest MAX plane, the 737 MAX 10, which has still not been certified by US authorities.

Because of a change in Federal Aviation Administration certification requirements enacted by Congress and which takes effect in late December, Boeing would likely need US lawmakers to pass new legislation.

The earlier 2020 law required the FAA to only certify planes equipped with a flight crew alerting system designed to help pilots prioritize warnings and advisories activated during flight.

The alerting system in the 737 MAX 10 shares the traits in the earlier MAX planes and does not meet the new standards. Boeing has argued the benefit of the MAX 10’s “commonality” with earlier versions of the jets, which enables pilots experienced in earlier version of the MAX to easily transition to the MAX 10.

Boeing executives have expressed confidence in winning an extension on Capitol Hill.

Another question concerns Boeing’s presence in China, the only major market where the 737 MAX has not returned to service following two fatal crashes that grounded the jet globally for more than a year and a half.

China was the last major Boeing market to deem the jet airworthy, in December 2021. But the plane still needs to clear a few final hurdles with Chinese regulators.

In light of strong demand from airlines, Boeing executives have begun “active discussions” with other customers about 138 planes in inventory ordered by Chinese companies, said Chief Financial Officer Brian West.

Executives described the outreach as part of an effort to “de-risk” Boeing’s finances given the murky outlook for the company’s China business.

China’s zero-tolerance Covid-19 policies “have reduced demand for airplanes in general,” Calhoun said on the conference call, expressing hope that free trade could be realized.

“But we also are clear-eyed about the geopolitical risks that are out there and we are not going to impart new risks on our investors,” said Calhoun, adding, “I have not gotten a single signal … they’re going to take deliveries in the near term.”

But Scarola still has a “strong buy” rating on the shares based on a strong improvement in 2024.