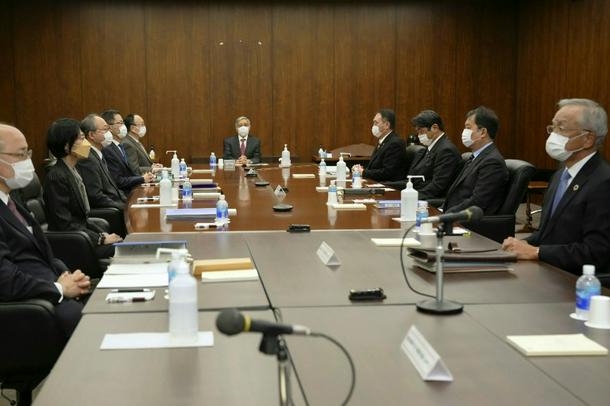 Tokyo (AFP) - Japan’s central bank left its ultra-easy monetary policy unchanged on Wednesday, bucking heavy speculation that it could again tweak a key lever and sending the yen plunging against the dollar.

The announcement after the two-day Bank of Japan meeting saw the yen sink about 1.5 percent against the dollar, with the greenback buying more than 131 yen after the decision, from around 128.45 earlier in the day.

Officials shocked the market last month by adjusting one of its policy tools, widening the band in which it allows rates for 10-year government bonds to move.

The bank said the move would “improve market functioning”, and the surprise decision saw the Japanese currency gain ground against the dollar after months of weakening over the gap between Japanese and US central bank policy.

The range set last month has been breached regularly in recent days, intensifying speculation that the BoJ would have to act again.

But policymakers left the yield curve control range intact and said it would continue with “large-scale” purchases of government bonds to support the parameters.

The decision boosted Tokyo stocks, with the Nikkei rallying more than two percent in the afternoon.

For months, the central bank has bucked the trend set by global peers and stood its ground on its loose monetary policy, convinced that inflation has not yet taken hold in Japan in a sustained fashion.

Prices have risen consistently over the past year, and while they have not neared the levels seen by other developed economies, Japan’s inflation rate is at a 40-year high.

BoJ Governor Haruhiko Kuroda, whose term ends in spring, has insisted though that the rises are largely temporary and linked to exceptional factors such as the war in Ukraine.

Kuroda has warned that the country is still far from achieving the bank’s long-standing goal of two-percent inflation, seen as key to stimulating a stagnant economy.

Still, the bank now expects inflation will hit 3.0 percent for fiscal 2022, up from the 2.9 percent it predicted in October.

But it forecast inflation of 1.6 percent the following year, unchanged from its last estimate, rising to 1.8 percent for fiscal 2024, up from a previous outlook of 1.6 percent.

The policy tweak last month fuelled speculation that it was moving to gradually tighten policy, though Kuroda warned then that the decision should not be seen as an effective rate hike.

Clifford Bennett, chief economist at ACY Securities, said the decision said the BoJ was “acting appropriately in what is still an uncertain economic growth path, and still low inflation levels”.

While other central banks have hiked rates, “Japan has long been a different story and remains so”, he added in a note.

Still, other analysts said the bank would be under pressure to move soon.

“Speculation will remain that it will eventually review its policy,” said Takahide Kiuchi, executive economist at Nomura Research Institute and a former BoJ policy board member.

“Market focus will now shift to the appointment of a new governor,” he told AFP before the decision, noting that the bank needs to “make its policy flexible” whoever is appointed.

The BoJ also revised its growth projections for the world’s third largest economy, tipping GDP expansion for fiscal 2022 of 1.9 percent, against a previous forecast of 2.0 percent.

The following year it now expects 1.7 percent growth, down from 1.9 percent forecast in October, but falling to 1.1 percent in 2024, having predicted 1.5 percent.