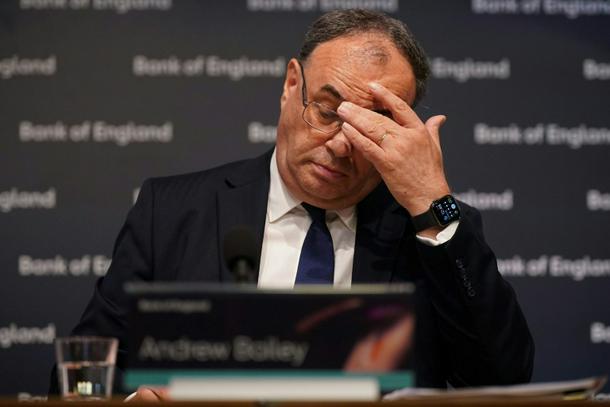 London (AFP) - Andrew Bailey is no stranger to economic storms as head of the Bank of England, becoming governor just as Covid was taking hold in Britain.

Less than three years on and Bailey is struggling to reassure markets that emergency BoE intervention on markets, notably by snapping up UK government bonds, is working.

His predecessor Mark Carney was named the “unreliable boyfriend” by traders for hinting at interest rate rises that never materialised.

Bailey, 63, was seen as acting in a similar fashion almost one year ago, while market chaos in reaction to BoE policy in the wake of Britain’s heavily-criticised budget has heightened such accusations.

“This is not the first time that Bailey has had troubles guiding the market,” noted Victoria Scholar, head of investment at Interactive Investor.

“He was labelled the ‘unreliable boyfriend’ last November for signalling lift-off on interest rates but keeping rates unchanged.”

Since then, the BoE has hiked its main interest rate to 2.25 percent from a record-low level of 0.1 percent in an attempt to cool the highest inflation Britain has seen in decades.

The coronavirus pandemic gave Bailey, from the city of Leicester in central England, no time to settle.

“It was the third day of my term when the markets team came into the office and said, ‘we need to talk’. That’s never good,” he told the Financial Times.

The BoE promptly slashed its key interest rate to an all-time low and increased its asset-purchase programme to prevent the UK economy from going under.

Britain’s output collapsed by a record 9.9 percent in 2020 on Covid fallout.

While it rebounded last year, sky-high inflation has put the economy close to recession.

That situation has worsened in recent weeks following a budget from the government of new Prime Minister Liz Truss that has spooked markets.

Fearing that uncosted tax cuts will plunge the UK into a debt crisis despite the BoE intervention, yields on long-dated UK government bonds have soared.

Bailey’s first 12 months in office saw him face scrutiny also over his previous role as head as Britain’s financial regulator, from which he joined the BoE.

Under his tenure, the Financial Conduct Authority was rocked by a series of scandals, including the collapse of former star investor Neil Woodford’s fund and London Capital and Finance.

The fall of LCF cost thousands of investors their life savings.

Bailey first joined Britain’s central bank in 1985, spending most of his working life on Threadneedle Street.

The married father-of-two played a key role during the 2008 financial crisis, when he was in charge of the bank’s special operations that oversaw the state bailout of Royal Bank of Scotland.

Bailey earned a doctorate at the University of Cambridge before becoming a researcher at the London School of Economics.