Pixar’s 25th feature, “Turning Red”, will arrive on Disney+ on March 11.  This East-meets-West Pixar anime hybrid is quite unique in many ways that certainly gives viewers a fresh and joyful feeling. It currently scored 93% positive reviews on Rotten Tomato. It was one of the highest-ranking Pixar animations. Here is why a story of a Chinese-Canadian girl made people laugh, cry and related so much.

“Turning Red” based on director Domee Shi’s own experience as a Chinese immigrant living in Canada. Meimei (voiced by Rosalie Chiang) was a good student and an excellent kid to her mom Ming (Sandra Oh). But this 13-year-old girl is now in middle school and starting to become interested in boy bands, pop music, dancing and trying to go to a concert of her favorite boy band “4 Town”. But mom didn’t realize the change of her daughter. She is still very protective and stubborn . She also wants her daughter work with her in the temple after school and presumes she is the best friend of Mei.  Mei also finds out that because of a family curse, she can turn into a giant red panda whenever she loses control of her emotions. Her mom tries to help her to get rid of this curse while Mei is battling if she should be true to herself and let the inner self out.

Among the past 24 Pixar’s features, there are 23 of them has male as leading role and all of them are written and directed by male directors. 36-year-old Domee Shi has become the first female director to solely direct a Pixar feature film. She also won an Oscar for her short film “Bao”, which is also a story about parenting and family. It’s important to notice that, Domee Shi got a team of female film makers for “Turning Red”, including but not limited to producer Lindsey Collins, co-writer Julia Cho, production designer Rona Liu. 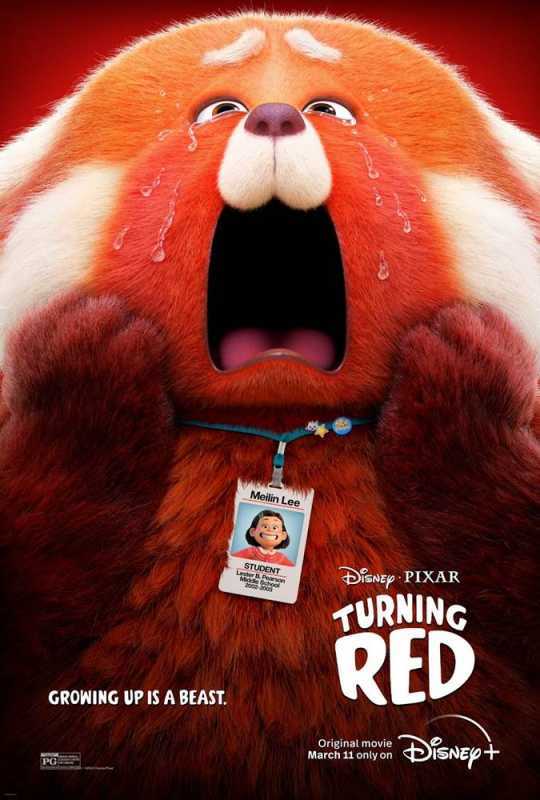 This is only the second story with female lead character from Pixar and most importantly Mei is not a princess, not a hero or a fighter but just a down to earth teenage girl. Even she can turn into a giant red panda, her mission in the film is just to be able to go to a concert of a boyband she loves, and hopefully not to piss off her mom.  However, with the female film makers behind the film and inspirations drew from real life experiences, Mei is super relatable for many teenage girls, especially those from Asian families that are trying to meet parent’s high expectations. “Turning red” openly discussed the tension between demanding mothers and the daughters who seek their approval.  Parents of teens will understand how relatable it is.

Many Asian parents can be very strict and protective to their kids but when kids grew up , especially in the western culture, they would start to rebel and wanted to have freedom of their own. How parents should deal with this change and how to communicate in a right way? This is the first Pixar animation  focus on a mother-daughter relationship and hopefully can lead to more discussion about parenting between viewers.

Like her short “Bao”, Domee Shi has brought so many Asian elements to the film. The most noticeable one is cooking and eating with family. In Asian family, parents do not say “I love you” very often , instead ,they express their love by cooking and having family dinners. Domee once again makes sure the Chinese food look authentic and delicious in the film that can definitely make many Chinese audiences miss their parents’ cooking. At the same time, people can see the expression of the characters are heavily influenced by Japanese animations and comic books, especially the eyes and their moves. The red panda is extremely cute and cuddly  , irresistible for everyone who sees it.

Domee said in the interview that choosing red panda is because Si Chuan is her home town and that’s where the red pandas are from. Red can also represent changes that happened to a woman during puberty. She often can be emotional, sweaty, embarrassed. It also represents the menstruation that every girl has to deal with. Transforms into a red panda when Meimei loses control is certainly a good metaphor for womanhood. Any woman who has been criticized by men for being “too emotional” will probably sympathies with Mei’s dilemma.

Puberty and Growing Up

“Turning Red” showed female puberty in such a candid, empathetic way. Mei and her friends are full of energy and imagination. They started to Imaginate what will be like as a woman and be with boys. This is the first time an animation showing young girls as passionate fans to boy band or idols. It’s hard to imagine male film makers would include topic like this in their stories. Thanks to the female film makers , we have the opportunity to see a film about what real teenage girls’ lives are like. Since the story is set in 2002, people usually idolized boy bands like NSYNC and The Backstreet Boys will definitely be reminded what being an enthusiasm fan felt like. Even nowadays Korean K-Pop group BTS has brought the boy band popularity back. Getting a boy band concert ticket is even harder than what those girls went through in the film.

Producer Lindsey Collins asked Billie Eilish to join the film and create the soundtrack because she is one of those pop queen the teenagers love right now. Billie made  the theme song “Nobody Like U” based on the pop music styles in early 2000s. It’s easy to notice that, in the film, the boyband “4 town” has a much more diverse group of members than NSYNC or other American boy bands back in 2000s. There is even one named Taeyung based on K-pop star.

The detailed designs of Mei’s clothes, her room and all the things she likes really represent a 13 year-old. The color palette is vibrant and bright, also trying to show the hormones of teenage girls. Streaming on Disney+ from March 11, this Disney animation doesn’t feature many big names among the voice cast apart from Sandra Oh . But strong reviews should help boost awareness among younger audiences and their parents.